The Year of the Peacock (Part II) 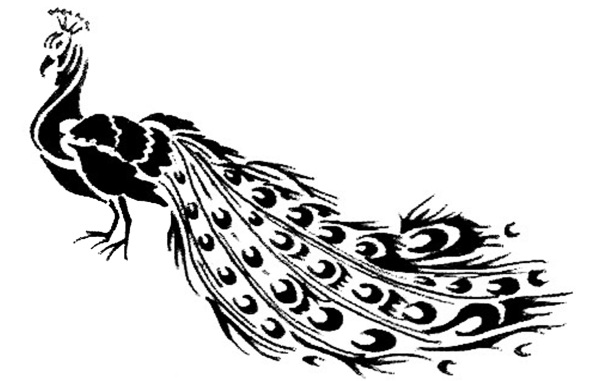 A man; Zev Zereshect is dead, his body found with a single gunshot wound to the back of the head in a parking lot on the outskirts of an abandoned city. A city like all others mankind had long left behind when the doors to Paradise finally opened. Those who had not made it through to the other side roamed through the ruins of what was once their dystopia, plagued by their demons that seemed to have come through that very same doorway. His body had been identified quickly, but a young girl no older than 12 who had been seen accompanying him earlier that day was missing.

The clouds open on a busy marketplace where one man walks hastily towards a parking lot carrying an extraordinary sight. The pregnant girl-child in his arms screaming out in pain, her belly round and her face constricted. As he walks toward a group of lonely buildings a white figure comes into focus, a man in glasses and a doctors uniform with salt and pepper hair directs him towards a stone gray doorway covered with a striped burgundy and white awning. There a man in a suit with blue eyes and an Ear piece holds the door open and leads him into a crowded diner. Behind them walks a man of the cloth muttering tiny words and small sentences onto his crucifix seemingly on the verge of tears. The people inside barely raise their eyelids through the haze of cigarette smoke and steaming coffee mugs. They wind through the maze of tables and booths to the back room where it opens out into a plant filled atrium sparsely decorated with round couches and a minibar. The bartender looks up from drying a glass as the suited man whispers into the earpiece, “let her know that we have brought them to the church as she has asked.”

“Well well well, what have you got for me boys?” The room looks over to the woman sitting to his left and says, “You see this? They never bring me anything good anymore.”

The woman looks up at the suited man and tries to convince him to speak, but then her attention focuses on the girl whose skin begins to bubble and blister as if she was being held in a pool of boiling water. The young girl screams out but her voice is muffled beneath the shady palm trees of the backalley lounge. The man carrying her looks down in horror as her body slowly melts from his hands, dripping to the grease stained carpet, leaving only a warm golden egg in his palms.

“You can put that there,” gestured the old woman without a second glance, pointing to the white pillows on the large day-bed that sprawled at his other side. She then proceeded to light her cigar and scratch her exposed shoulder looking the young man in his face.

“So,” she says? “Anything else you want to say to me, cause if you’re about done, Vincent here will show you out. With a wave of her cigar hand, Vincent took the young man’s arm and began pulling him back towards the diner.

“Wait!” He managed to get out, envisioning a small fetus growing inside the golden shell. “It’s a peacock isn’t it, in there?”

“So it is,” replied the woman in an exhale of sweet tobacco smoke, “I suppose for all intensive purposes, that would make this the year of the peacock, now wouldn’t it?”

The young man smiled a sad smile as he was dragged past the priest now crouched on his knees with his crucifix buried deep in his elevated palms. He looked back at the golden egg one last time, glimmering beneath the colored disco lights before passing through the doorway back into the diner.

“It has finally arrived!” Shouted the priestess from the darkness on the other side of the door as it slowly swung closed. A few figures turned on their bar-stools to see what the fuss was but soon returned to their milkshakes and slow conversation.

The young man did not see the man in the suit reaching for his gun as he heard the priestess’s words. He did not stop or turn back, but was sure he knew what the priest meant. He was sure it was finally…The End